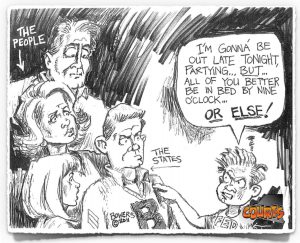 In the Federalist No. 45, James Madison wrote, “The powers delegated by the proposed constitution of the federal government, are few and defined.”

The next sentence follows, “Those which are to remain in the state governments are numerous and indefinite.” He then adds, “The powers reserved to the several states, will extend to all the objects, which in the ordinary course of affairs, concern the lives, liberties, and properties of the people; and the internal order, improvement, and prosperity of the state.”

In fact, since the Bill of Rights can be rightfully considered part of the original Constitution there have only been 15 additional changes or Amendments.  There is no constitutional authority for the the federal government to intervene in the natural, universal and historic definition of marriage.

The Supreme Court came to a wrong opinion with regard to the constitutional facts of the case. The Constitution specifically leaves the ordinary affairs, concerns for life, liberty, and property to the people and their own desires for local governance.

If the Supreme Court can ignore facts and written history can you and I follow their example?  What will happen to our Constitutional rights? Can they also be ignored?

Does this mean restraints on Congressional action no longer apply?  The preamble to the Bill of Rights explains the States’ desire to prevent misconstruction or abuse of federal powers with further restrictive clauses such as:

Can Congress, like the Supreme Court and President, ignore these clear restrictions?

The precedent has been set but not by this Court alone:

Convincing the Court they got their summation problem wrong might be harder than you think. Especially if the facts, theories and principles of mathematics are left out of the discussion.  If we disagree with the Court, it is only because we have a different view of the real world.  After all, in a 1992 abortion case Justice Kennedy’s opinion included, “At the heart of liberty is the right to define one’s own concept of existence, of meaning, of the universe, and of the mystery of human life.”

Was their ruling simply one of life’s mysteries?

Justice Scalia, in his dissenting view notes, the people have been robbed, “of the most important liberty they asserted in the Declaration of Independence and won in the Revolution of 1776: the freedom to govern themselves.”

Like Scalia, I too am astounded by, “the hubris reflected in today’s judicial Putsch.”  In his closing, Scalia lets his arrow fly straight at the heart of the matter,

“The world does not expect logic and precision in poetry or inspirational pop- philosophy; it demands them in the law. The stuff contained in today’s opinion has to diminish this Court’s reputation for clear thinking and sober analysis.”

America needs help from more people like you and I. People who believe in self-governance, freedom and liberty within our Constitutionally ordered government.

By Liberty, I do not mean a state of licentiousness, where our culture subverts order and  breeds a defiance of rules.  I mean, rather, a well ordered government which is limited by a set of specifically enumerated powers.

The Bill of Rights was a beautiful extension of the Constitution where the founders admitted the possibility of government growth and usurpation. These restraints were designed to protect men’s rights from the designs of those who are “more remarkable for their ambition and cunning, than their patriotism.”

*   putsch : noun
1. a plotted revolt or attempt to overthrow a government, especially one that depends upon suddenness and speed. 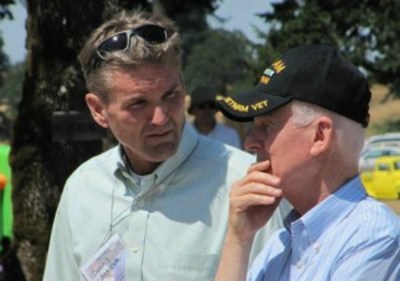